When I found out I was pregnant, the thought of my innocent little baby having an ultra-rare disease never crossed my mind. I was asking myself questions like “Is it going to be a boy or a girl?”, “Am I going to be a good mother?”, “What am I going to name him/her?”. Then during a routine ultrasound when I was 20 weeks pregnant, my world got flipped upside down. The ultrasound technician suddenly excused herself from the room with a shocked look on her face and 15 minutes later, came back with a physician. They told me that my daughter had bowed femurs and they were unsure of what was causing this. I would spend the next few weeks seeing multiple specialists who threw around a few different diagnoses but the two most common were Osteogenesis Imperfecta or Hypophosphatasia.

At 39 weeks and 5 days, my husband and I welcomed our beautiful daughter, Aubrey Emma Britt into the world. She was born with a packed full delivery room of physicians as they were preparing for the worst. She weighed a healthy 6 pounds, 6 ounces and was 19 ½ inches long on February 18th, 2013. Other than her bowed femurs, the pediatrician at the hospital said that they would say she was an otherwise healthy baby. If they didn’t know what he possible diagnoses were, they would never have guessed by looking at her. Our stay was short and nothing out of the ordinary. We were discharged 2 days after delivery and began our life as a family of 3.

Our time getting settled at home with a newborn was short lived. The day after we got home from the hospital, we noticed that it seemed like she was choking when nursing. So bad to the point where we took her to the emergency room. They did a few tests and then sent us home saying they couldn’t find anything wrong. The next morning when she was nursing, she did the exact same thing as before, except worse. She had stopped breathing for a seconds and this “episode” lasted longer than before. We immediately took her back to the emergency room. They were preparing to discharge us again but we insisted that they keep running tests. They transferred us to the local children’s hospital and just like clockwork, the next morning she began choking again. She was immediately intubated and sedated. They had us transferred hospitals again to a hospital that was more equipped to handle this kind of case. We were transferred to Phoenix Children’s Hospital and we quickly started getting answers. These “choking episodes” were in fact seizures. The next part of Aubrey’s journey is still to this day unbelievable to me. The neurologist that was assigned Aubrey’s case was having lunch with the geneticist who was taking care of her. They had a guest at lunch that day that was visiting from out of state. They were discussing her case and the guest at their lunch mentioned that her symptoms all seemed to be pointing back to Hypophosphatasia. He suggested they try treating her seizures with B6. Miraculously, his plan of treatment worked! We were discharged a few days later with a definite diagnosis of Hypophosphatasia with B6 responsive seizures.

Fast forward a few weeks, we were given the options for Aubrey. They said there had been research where they could try a bone marrow transplant (very risky, unknown end result) or our other option was a clinical trial for a medication that we would have to inject her with daily. There were no other treatments for HPP. An easy answer for us, we decided to go with the clinical trial. When Aubrey was just 5 weeks old, we were off to Oakland California where we would be staying for anywhere of 3 weeks-6 months while we got enrolled in the study. Aubrey received her first dose of the medication at only 5 weeks old. The treatment wasn’t anything where we would notice a difference overnight. We had to wait it out. Each time we travelled back to Oakland for a checkup, she was improving slightly each time. October 23rd, 2015 treatment was officially FDA approved as the only FDA approved treatment for Hypophosphatasia.

As Aubrey got older, she was diagnosed with other medical conditions along with HPP. When she was 9 months old, she underwent surgery to have a VP shunt placed to treat her newest diagnosis of Hydrocephalus. A year later, she was diagnosed with Failure to Thrive and had surgery to have a gastrostomy tube placed. With each new diagnosis, it was harder and harder for me. Always thinking “what’s next?” To Aubrey, she continued being the super happy, playful baby she had always been. Nothing would set her back. She continued to fight and adapt with all new obstacles brought her way.

Aubrey was always smaller than other babies/toddlers her age. She hit milestones long after she was “supposed to”. Learning to roll over, crawl, talk all came at the right time for her and with a lot of effort and work. She started losing her teeth just before she turned 1. The teeth had barely come in when they would fall out, root intact. To much surprise, when Aubrey was 4 ½, she took her first steps. Such a joyous moment, one I will never forget. Aubrey became a big sister when she was 11 months old (yes, I know, we are crazy!) She loves every second of it. She calls herself the little big sister as she is much smaller in size compared to him. We celebrate all her successes and we are thankful for every single one of them we get to experience.

Fast forward to November 2018. Aubrey is doing everything doctors told me she would never do. She is beating all the odds. She is excelling in Kindergarten. She uses a wheelchair to get around campus and for long distances but she is walking the majority of the time. This past month, she was awarded with Student of the Month for her grade and also MVP out of her whole school in PE. Are you kidding, MVP in PE?! Never did I think she would get to participate in PE let alone be selected as MVP. Watching her walk across the stage to accept her award brought tears of joy to my eyes. She is so kind-hearted and treats everyone with love. Teachers at her school that I have never met before express to me how much happiness she brings to their day. We are so incredibly proud of her and the impact she is having not only on our lives, but also those that she interacts with even for a brief moment. She is a fighter, always has been, always will be.

With the drug being FDA approved and the trial over, we decided to move her continued care to Dr. Michael Whyte’s team at Shriner’s Hospital in St. Louis. We have been going to follow up visits every 6 months until recently, where we will now be going every year. When she was born, you could barely see her bones on x-ray. Now, aside from small signs of rickets, her bones appear as healthy as a child without HPP. We also follow up locally with her specialists to keep all her physicians up to date in case there is anything that comes up outside of our normal visit to Shriner’s. Aubrey receives physical therapy and occupational therapy at school and we are in the process of getting her back into feeding therapy. Lots of time spent in doctors’ offices but well worth it to make sure everyone is current.

If I had to give one piece of advice to a patient, mother, father, family member, friend of a newly diagnosed patient, it would be to fight. Fight for them/yourself. You are the best advocate for that person. No one is going to know the best course unless you speak up for what you feel is right. Never stop fighting for answers and never give up. You will thank yourself for staying strong and listening to your heart. 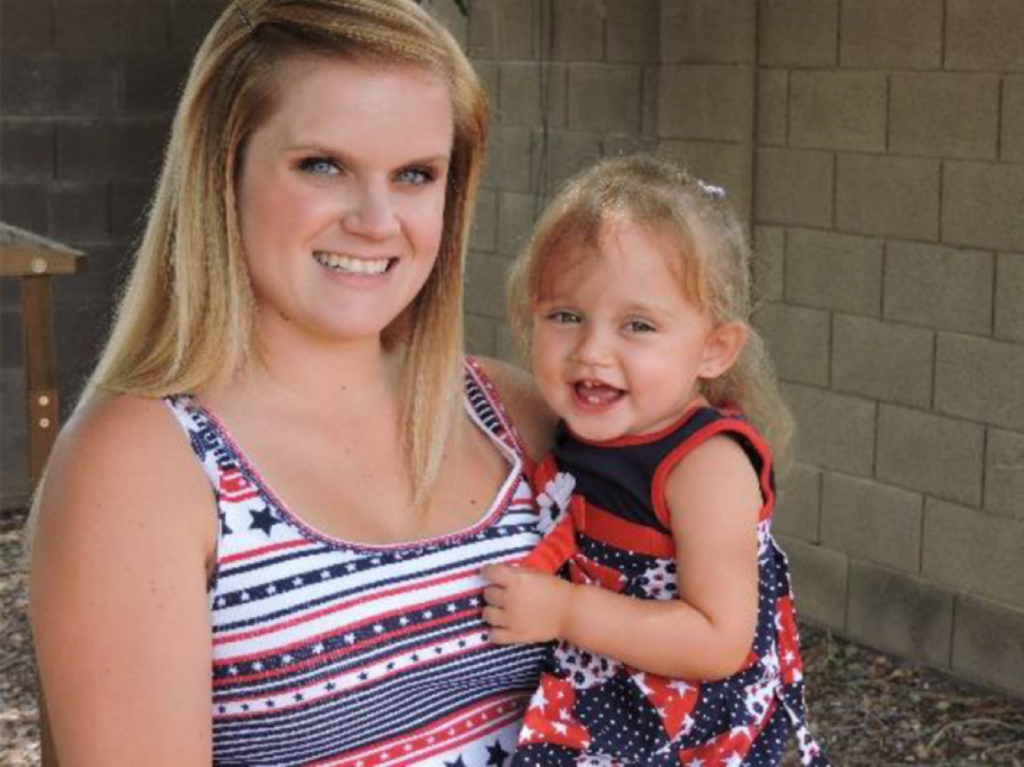 Have you ever had the ultrasound tech stop what she was doing, and say she needed to go get the doctor? Well, I have. And…